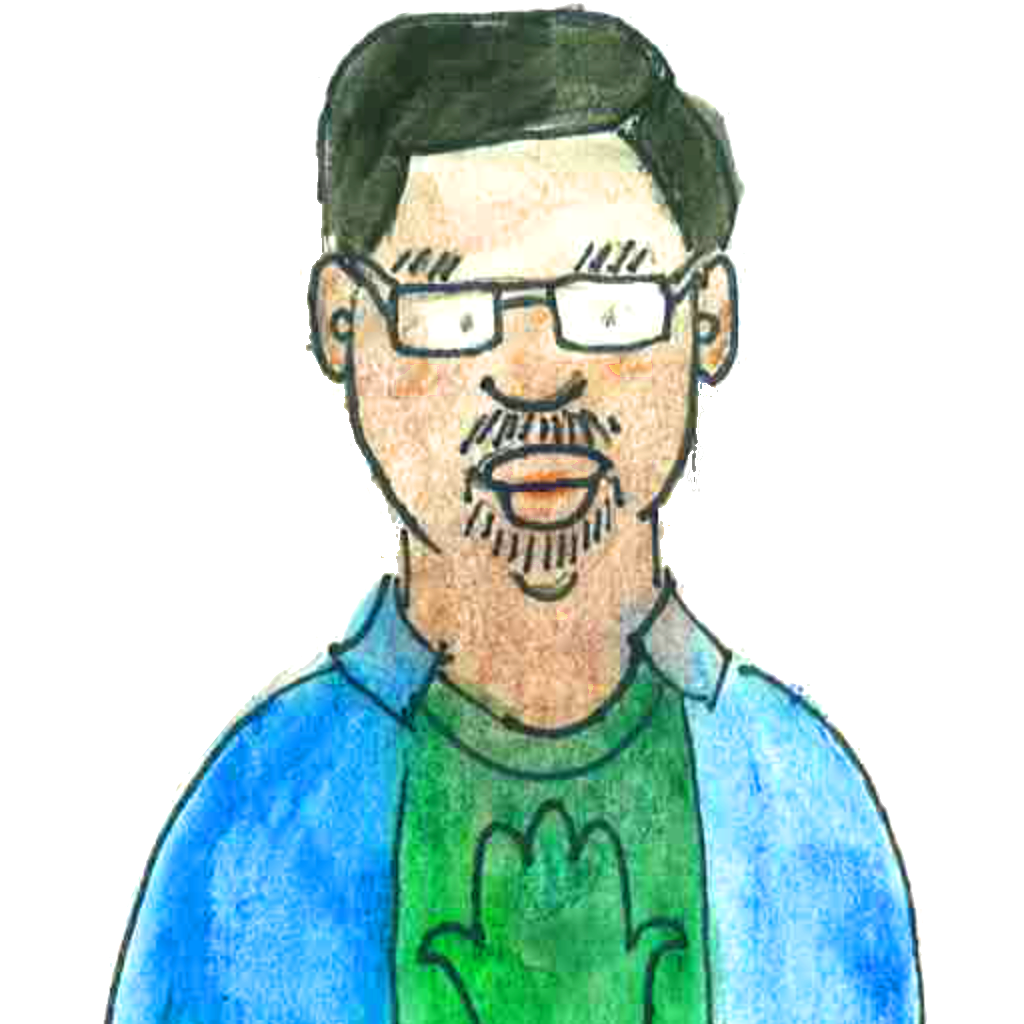 I’m Freeman Ng, a digital artist and the author of:

and the co-author, with Peter Dale Scott, of:

How did you get the idea for this strip?

I got it almost the moment I learned that Dilbert creator Scott Adams was a Trump supporter. That blew my mind, because I love Dilbert, and it was hard to believe that the creator of that world would consider Trump to be anything other than the Worst Boss Ever.

From there, it was easy enough to arrive at the idea of a parody. I’d put Trump directly into the Dilbert world and let him be judged by it.

If you’re a digital artist yourself, why didn’t you do your own artwork?

I’m an artist with no actual drawing skill! The AI-driven method I use isn’t very suited to creating cartoon images.

Why a pen name?

Normally, people create pen names to either distinguish themselves or create anonymity. If you’re a journalist and would like to ask Ghanem about this choice (or anything else) directly, I can relay a message.

Why do you use the same drawings of each character over and over?

I pay Ghanem for the drawings, but could only afford a minimum set of pieces from which to construct each day’s strip. When my Patreon support reaches a sufficient level, I can start paying for entire strips to be drawn from scratch.

What’s with the “hover text” and the links?

Hover text is a thing I see some of my favorite strips doing. If you hover the mouse cursor over the image of the day’s strip, an extra little punchline pops up. Unfortunately, this only works on the blog, and only in a desktop browser. I can’t figure out how to make it happen for Facebook or Twitter posts, and so there, I just spell it out in the description. I have yet to come up with a solution for phone or tablet based browsers (where there’s no mouse) or for the email delivery option for the strip.

The links are something I added because I want to make sure my readers know the news stories I’m referencing. Part of the challenge of this presidency is the sheer volume of its villainy.

Because I don’t want the links to be a burden on the reader, I try to make them funny, too, which adds to the creative load for executing this strip. First the punchline in the final panel, and then the hover text punchline on top of that, and then the link. (And then the Saturday bonus panels and monthly bonus strips for my Patreon supporters, each of which has its own hover text and link, of course.)

Is this a daily strip?

I post the public strips Monday through Friday, with each week forming its own story arc. (I might spend multiple weeks on the same general topic, but each week will still be a separate story within that topic.) Then, on Saturdays, I do a bonus panel for certain Patreon supporters, and on the last Sunday of each month, I do a bonus strip for the highest tier of Patreon supporters.

Why aren’t you always addressing the very latest news?

At the beginning of the strip’s life, I had to post a lot of generic material in order to establish the world, and so could not deal with current events in a very timely fashion, but now I’m more free to respond fairly quickly to breaking news. I’m currently writing the scripts roughly the week before they post, so there’s isn’t much lag time between composition and publication.

Sometimes, though, I work up a multiple week treatment for some topic, and before those weeks are over, some big new scandal breaks out. (Trump is almost too good a comedy source in this respect.) So then I fall behind again.

Also, I still have some generic pre-written scripts that further develop my comic world — one of them introducing a couple of space aliens, for example, and another one dealing with the usage of “sock puppets”, which was a past practice I was surprised to find both Trump and Scott Adams had in common — and will try to fit those in on slower news weeks.

The short answer is that I can’t! I’ve tried, but I just don’t seem to have that skill in me. And even if I did, there’d be a risk that portraying him as verbally silly would detract from the more needful portrayals of his heartlessness and dangerous neediness.

I’m much more happy that (if I do say so myself) I’m accurately replicating, or at least evoking, at least some of the time, the particular rhythm of the original Dilbert humor. I really do love Dilbert, more for the great comic timing of its writing than anything else.

What are your favorite Trumpbert strips so far?

You’ve referenced Peanuts twice now, and mentioned your love of Dilbert. What other comic strips do you like?

Peanuts was definitely one of my favorite strips from the past, along with The Boondocks and Doonesbury (which is still running on Sundays, but I’m thinking more about its glorious daily past).

Here are some of my favorite currently running strips.

How long do you plan on continuing the strip?

Until Trump is out of office. (Actually, maybe for a month or two more after that. His post-presidential meltdown should be good for a few final laughs.) I’ll be the only comic strip creator ever fervently hoping that he can end his strip as soon as possible.

What precisely are your own personal politics?

I’m ultimately an Anarresti at heart, but a realist in practice, and, I hope, appropriately agnostic about all such matters. I don’t honestly know if it’s possible for us humans to achieve a completely healthy society — there may be evolutionary limits to our brains that all the empathy and rational thought in the world will never quite overcome — but if it is, I don’t expect us to get there for many generations. (No, the “revolution” progressives dream about these days is not at hand!) In the meantime, however, the tug-of-war goes on, and every inch we can move that rope is another step toward that future.

Do you see this strip as such a “step”?

No! It’s just entertainment, helpful only to the degree that it might slightly improve the morale of the troops. There’s nothing courageous or especially clever about shooting fish in a barrel, but it can be fun and stress-relieving.